What Documents Do I Need to Make my Insurance Claim? 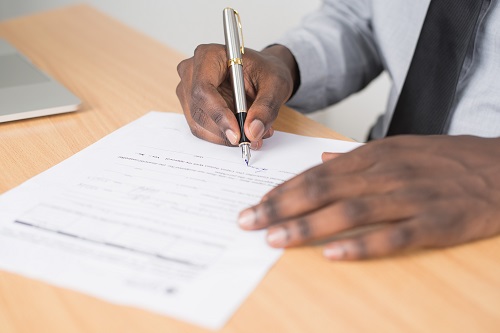 Filing an insurance claim after a car accident can be complicated. It’s difficult to know what to include and what’s relevant to your injuries and damages. Should you include photos? Are there guidelines for including medical expenses?

After a Colorado Springs auto accident, you want the claims process to go as smoothly as possible so you can focus on recovering and getting back to normal.

Read on to learn what documents you need to make your insurance claim in Colorado Springs.

What documents do I need to make my insurance claim?

I’m attorney Jake Kimball, a partner at Springs Law Group. I want to talk to you about documents that you would want to include in your insurance claim after an auto accident or incident where you were injured because of the fault of another.

The overarching theme here that I want you to understand is, if it’s not in a document, then you can pretty much guarantee that the insurance company’s not going to believe it. If you look at it from their perspective, they don’t know you, they don’t know if they can believe you, and one of their jobs is to make sure that you’re not pulling anything over on them. That’s why you need to provide reliable documents to them so that they can evaluate your claim.

Let’s say that your neck is hurt in this accident. However, maybe you also hurt your neck 10 years ago in an auto accident. Alternately, you have degenerative changes because you’re getting old like everybody is. Perhaps your neck is sore because you sit at work too long at a computer.

Say you went to the chiropractor a few times before this accident. Well, you’re going to need to get those records because those are relevant to your claims now. If you’re claiming that this accident made your neck worse, well, you have to show them what it used to be like before. Then, you can establish what it’s like now.

Again, they’re not going to take your word for it – what you were like before the accident – they’re going to want to see the records of everybody you saw for that condition prior to the accident.

Then, along with the medical records, you’re going to want the medical bills that are related to this accident. You’re going to want to get the billing statements from your provider. Don’t just give them the bill you get in the mail because that’s often incomplete. The insurance company is required to pay on the full billed amount – not the reduced amounts that may come after your insurance has paid and adjusted and all those other things. So, make sure you have that proper billing statement from your provider that shows the full amount billed included in your claim.

You also want to include the accident report. If the police were called, then you need to get the accident report from whatever jurisdiction showed up. Was that the sheriff’s office? The city police? State patrol. Whatever that is, get that and then look on that report and see if that officer denoted that they took photos of the accident. If they did, I recommend you get those too. A lot of times they’ll take pictures or angles and perspectives that you not have had – if you even took photos. Those could be really helpful for your case. Then, if you took your own photos please include those as well.

Also, include photos of your injuries. For example, if you had bruising because of a seatbelt and you took a picture of that, include that. Then, tell them that you’re the one who took the picture – or name whoever took it, like your provider. Just tell the insurance company it was taken by so-and-so and they can establish where that picture came from.

You also want to include any property damage estimates. Property damage after car accidents is most often damage to the vehicle. If you got an estimate from a repair or body shop to get it fixed, include that. Or, if your vehicle was totaled out, and maybe you had a dispute with the insurance company about how much it was worth maybe you got an appraiser to look at it, any of that documentation you’re going to want to include in your claim.

The severity of the damage to your vehicle will often affect how much the insurance company is willing to pay you for your injuries. So, for example, if your car is crushed like an aluminum can, they’re more likely to pay for your injuries than if there’s just a tiny dent or scratch in the bumper. That’s just the reality of dealing with insurance companies. I’m not making a comment on whether you’re hurt or not. I’m just telling you about ease of claim and why you want to include property damage material in there.

If you’re making a wage loss claim, you would also want to include any pay stubs showing that:

You can get compensated for that. Even if you used paid time off from work because of the accident, you’re still entitled to be reimbursed for that. Paid time off is valuable, so make sure to include that in there.

If you’re self-employed this is going to be a little bit more work. If you’re a 1099 or if you own your own business, you’re going to have to be ready to show why you made less money because of the accident. That may mean involving your accountant or your bookkeeper, but just be aware that’s going to be an issue and it’s going to take a little extra work.

Then I would just say as a final thing: Include anything else. An insurance claim is really just an argument to the insurance company. Why should they pay you anything, right? The better your argument, the more money they’re going to offer you. If you think that there’s a piece of paper, a letter, a report, or a photograph that would help them understand your damages, what happened to you, and how the accident affected your life, then just include it.

It costs you nothing and you may actually end up getting compensation for something that you thought you weren’t going to get because you actually made a persuasive case on what should be included.

If you have questions about what needs to be included in your demand, we offer free consultations and we’d be happy to meet with you and talk to you about your auto accident. We would explain to you what we do and how we could help you, but you are certainly not obligated to hire us. We do recommend you hire some lawyer, but if you decide not to that’s fine. That’s your choice, but we can help you talk through what you would need to make a persuasive claim with the insurance company.

If you’ve been in a car accident, contact a Colorado Springs personal injury lawyer right away. Since there are some strict timelines when dealing with car accident and personal injury claims, we suggest you don’t wait. Get the legal help you need and deserve so you can get fairly compensated for your damages and injuries.

You can find more information on our website or by giving us a call!